The members of WDHOF are an elite group that includes the most notable women leaders and innovators in the diving community. It became the goal of it’s founders to recognize and honor, while raising public awareness of these women’s exceptional contributions. WDHOF was founded in 1999, and continues to be a collaborative effort between Beneath the Sea, Inc., the Underwater Society of America, the Women’s Scuba Association, Women Underwater, Hillary Viders, Ph.D., and Capt. Kathy A. Weydig.

“Michelle’s love for the ocean, passion for exploration and environmental activism has guided her diving career since 1970. She is the founder of Dive Experience, St. Croix’s oldest originally owned dive center. Michelle was the first woman to teach PADI classes in Moscow, Russia. She spearheaded “Project Anchor Away” which established dive moorings throughout St. Croix and serves as a testament to her vision for protecting the marine environment. Michelle involvement on the Fisheries Advisory Committee and her work to create the East End Marine Park is part of her continued concern for the US Virgin Island marine life.” 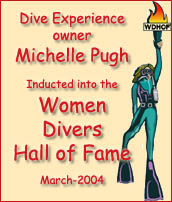